You can find on this page the map of Vienna tram. Vienna tram also called Straßenbahn is a transit system serving the city of Vienna (Austria) with the subway, the urban, suburban & commuter train and the bus. The tram network has 29 lines and 1.071 stations forming a rail network of 109.9 miles (176,9 km). 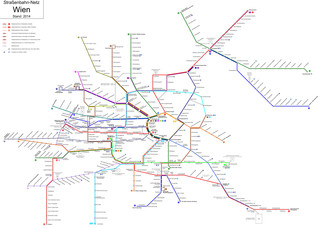 Vienna trams which transport 293.6 million passengers per year, exist since 1865 and are operated by the Wiener Linien. Its network includes 22 lines.